The rescue of the glass windows of the Saint Victor Chapel, priory of Bray-sur-Aunette.

You are here:
Uncategorized 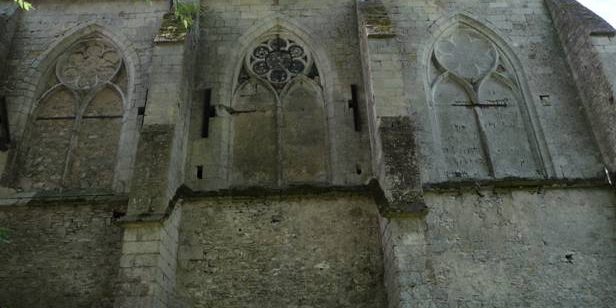 The rescue of the glass windows of the Saint Victor Chapel, priory of Bray-sur-Aunette.
Village of Rully (60)
Property of Mr and Mrs SIROT
Worksite lead under the supervision of Thomas Gaudig, Pierre Leclerc and Guillaume Moine’s Heritage Architect cabinet.

The restoration of the Saint Victor Chapel from the priory of Bay-sur-Aunette, dating back to the 12th century, constituted the framework for an unusual operation in the field of conservation and restoration of stained glass windows, namely freeing the remains of windows that had been walled up during the blocking of windows in the 19th century.

While everything seemed to indicate the stained glass would be unrecoverable, it was in fact possible to clear and secure a certain number of windows but also some panels still made of lead and some elements of locksmithery.

Once observations in the workshop had confirmed the authenticity of the 13th century stained glass windows and paintings and enabled the identification of some of the ornamental patterns, a first phase of restoration was undertaken for four window panes so as to reveal the nature of the artwork but also the quality of the original coloured light that bathed the building, light which we had the privilege to appreciate and imagine on a monumental scale thanks to the conservation of some vestiges which were barely corroded.

Beyond the interest proper for knowledge of the design of the priory, this worksite paved the way for similar investigations on other buildings.
Indeed, a lot of bays, obstructed over time, have never been subjected to sounding. The Bray experience invites us to reflect upon the creation of a methodology unique to this problem. The feasibility of restoration after the clearance is encouraging because it will now enable these discoveries to be better valorised and to be presented to the general public as elements of the precious but fragile “light heritage” of the chapel.

Proposal of restoration currently under study.

In April 2013 the “La Nuée Bleue” editions published a beautiful collective piece of work about the Chartres cathedral entitled “Chartres, the grace of a cathedral”..
25 February 2020

Traduction dans actualités à partir du lien photo. Emma Groult, a student in her fifth year of the conservation-restoration of cultural property master at Paris I Panthéon-Sorbonne, presented her brilliant viva-voce on the 25th of June 2013 on the following subject : “The characterisation of printed glass used in stained glass windows between 1880 and 1940 : problematics of conservation/restoration.” .
25 February 2020